Introduction to the leader of Silsila Azeemia:

in 1947 after the formation of Pakistan, Muhammad Azeem moved to Karachi with his family.

His pen name was Barkhiya.

In 1960 Silsila Azeemia was established.

Hazrat Muhammad Azeem’s literary works are as below: 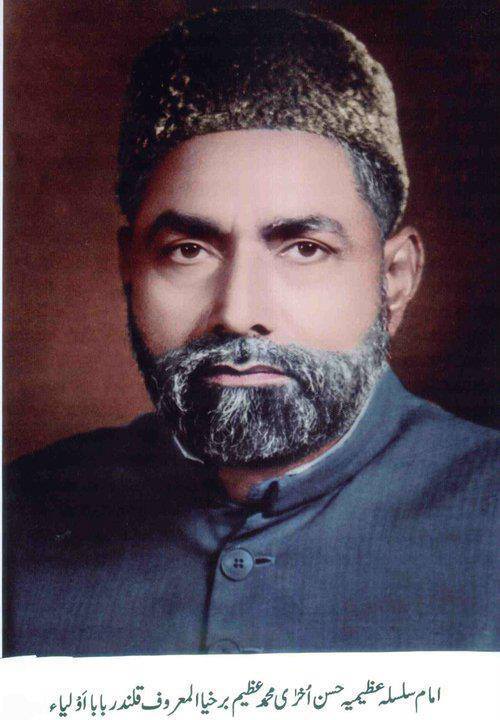 Silsila Azeemia is a spiritual and educational school, which is related to Sufism and knowledge of the Inner. The leader of Silsila Azeemia is Hazrat Muhammad Azeem Barkhiya also known as Qalandar Baba Auliya.

The training of spiritual students is usually undertaken in 2 ways, one is the Sufi path and one is of mystical revery/Sufi trance.

The motto of Silsila Azeemia is to attain cognition of Allah. The purpose of Silsila Azeemia is to understand the Oneness of Allah, to have recognition of Allah’s attributes, to contemplate within the Quran and to contemplate upon the teachings of Prophet Muhammad (PBUH) who is the reason for the creation of the universe, the first noor (subtle light) to be created and the Seal of the Prophets. To fulfill these objectives you will have to pass through the stages of inner cleansing and recognition of the self.

Spreading the message of Allah’s Oneness and the divine mission, and inner cleansing to mankind is the collective responsibility of the Muslim Ummah. Prophet Muhammad (PBUH), his companions and family members have left clear and excellent examples of how this should be done.

After the Prophet’s companions, the Prophet’s family, Tabaeen and Taba-Tabaeen, the responsibility of teaching the world about the Quran and Sunnah and preaching Islam was taken care of by scholars; this includes scholars of outer knowledge and inner knowledge (also known as Auliya Allah).

Then we need to understand Sufism as a Muslim. What is the importance of Sufi teachings for a Muslim? We should understand, which needs of a Muslim are fulfilled by Sufi teachings?

And then in further detail as an Azeemi, we should try to understand these teachings i.e. following association with Silsila Azeemia what are the requirements of this journey of learning and cognition?

Worship of Allah; on one hand it is following Allah’s orders. On the other hand it is the expression of the desire of closeness to Allah. Closeness to Allah is the first requirement of the soul. Allah has shown how to fulfil this and Allah’s messengers have taught people how to travel along these paths.

Alongside this is having respect for the Sufi school and its lineage of spiritual associations.

The work of Auliya Allah can be divided into 4 main sections.